Email ThisBlogThis!Share to TwitterShare to Facebook
HeavyHardMetalmania brings us an emerging band from Finland. Kimmo and Gökhan  tell us everything that we did not know, pics and video ... check below.

Nuno Ribeiro -    Can you Clarify just a curiosity "SOLACIDE" = the sun's murder?
Kimmo: Actually Solacide means murder of solace.
NR -  Is the message in your work based on discharging your own aggressions.... emotions/feelings?
Kimmo: Everything I write is basically a way for me to express different feelings and thoughts, not just aggressions. We haven´t written about fantasy stories, I think there are so many unbelievable stories from real life, that I rather write about those. There are so many things wrong in this world, that there should not be any problems of having ideas what to write about.

NR - SOLACIDE has the background of melodic death metal; the surface feels like Black Metal. This mixture will not please the purists ... looks great in the final product.
Is there a Mix of influences from synergies with its members?
Kimmo: Heh, I know purists probably hates our stuff, but then again our music is not meant to please people with so narrow taste of music. Up until this point I´ve written everything in the band, music, lyrics and arranged also. I have quite vast variety of influences, and most of them are not Death or Black Metal. I just try to create something new when I write a new song. Even though we sound like Death/Black Metal, I think we have our own perspective to the music, you can hear it´s Solacide.
Gökhan: In my opinion, there is good music and also there is bad music. There are lots of good pure black metal bands, old school death metals, thrash metal bands, etc. out there but there also shitty ones. I, myself love those kinds of music,so I am a "purist" too, in that manner. I received so many positive feedbacks from  many "purist" looking guys after our gigs like "your music&performance is like a punch in the face" ,or "your music&performance is like ass-raping/ass-drilling metal". So I think that "purists" like us, at least after seeing us once at stage.
NR- With this result comes the first EP (demo) of the band of 2009, with an independent release.
The discharge of aggression throughout this work is constant, why the name "Baptized In Disgust?
Kimmo: I remember we had a problem on inventing a name for the EP. The name basically comes from the idea of baptism, how ridiculous it is to baptize new born babies to some religion, which they won´t understand for a long time. But that´s the idea of brainwashing, to program you to love something that any reasonable human being would find disgusting.
NR - SOLACIDE has been also preparing new material and as expected they´ll be in studio this year for the release of its first “full-length".
Can you lift the veil a little bit and give us details of the new job? What can we expect?
Kimmo: We will record a promo version during the summer, and I hope we will have time to go to studio during autumn to do the proper album. It´s going to be really special for us, we´ve been doing demos and EP´s for the last 10 years, so I think it is time for the first full-length finally. It´s going to be aggressive, progressive, but also melodic. We have very good musicians in the band, so playing is very tight. And also the feeling inside the band is good, everyone loves playing in the band and gets along together very well, and I believe you can hear it from our playing.
NR - The Band in the past two years has given gigs in Finland and Russia.
How did the public reacted in these performances?
Don´t you feel the need "to get closer to the sun" an approach to the west to a more attractive market?
Kimmo: Russia was a rough trip, but the audience was good. We´ve had good shows in Finland too, but the audience is always very shy, unless they´re drunk off their asses. But that´s the same thing with most bands who play in clubs here. Sad to say, but the worst audience I´ve ever seen is in Finland, and I´ve done quite a few shows across the Europe with different bands. It seems that we have more fans around Middle Europe than here in Finland, so of course we try approach markets abroad.
Gökhan: We have some plans for playing some shows in Sweden, Germany, Czech Republic, Netherlands, Estonia and Turkey next year.
NR - SOLACIDE is already based on a very appetizing sound...with a professionalism flavor. Getting a label would prove to be the ideal at a time like this?
Kimmo: It would. We´ve had quite a few offers from labels, but none of them has been really interesting. We can smell the rip-off deals mile away, and we´re interested only on proper deal.
Gökhan: There had been a few labels offering us deal. Some of them were very well-intentioned but some of them were just ridiculous. Once a label sent as an email stating that they offer us a label deal and we have to make the whole recording ourselves and press all the cds, covers ourselves and send the cds to them. They said we would get some percentage from the sales. I wrote them back that this is not a label deal, this is a distribution deal. The guy replied me "yes, you are right, this is a distribution deal" . Some people are just loss of time.
NR - Well, I leave you now the opportunity to distill your hatred in these last lines! "discharging own aggressions.”
Gökhan & Kimmo: You will be able to read “the discharged own aggressions” in and between the lines of the upcoming album.
NR - Thank you for your time.
Gökhan & Kimmo: Thank you for the interview, and everyone go check out Solacide from Reverbnation, Facebook, Myspace and our live videos from Youtube. 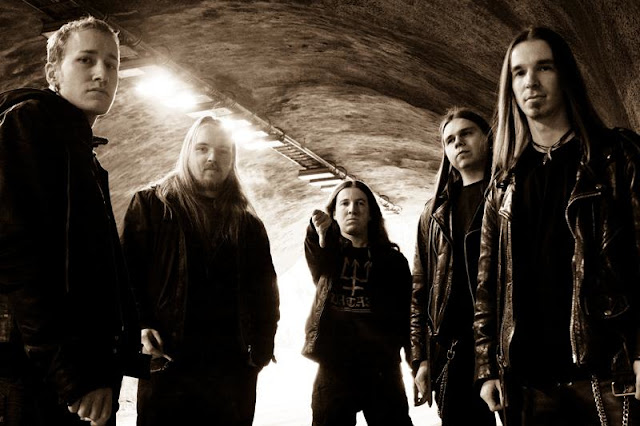