We were living the hangover of death (from overdose and 'death by misadventure' according to the death certificate) of Bon Scott, born Ronald Belford Scott, Kirriemuir, in July 9, 1946, the Scottish singer, songwriter and frontman of the Australian band AC/DC from 1974 to 1980.

Brian Johnson (Gateshead, 5 October 1947) British singer and songwriter was one of the founding members of the glam rock band, Geordie. After a few singles that became hits, they reached the Top 10 in the UK with the song, "All Because Of You" (1973). The band broke up in 1978 and then was restructured in 1980 by Brian, but once signed a new contract with a record company, Brian Johnson was asked to audition for AC/DC. A fan of 14 years sent a letter to AC/DC talking about Brian of the band Geordie, Malcolm Young remembered the show he had gone to watch with Bon Scott and the two had commented that Brian was a great vocalist. Short time after the band called him for an audition, and until today Brian is the lead singer of AC/DC.

With Brian Johnson assuming Bon Scott’s role the band remained strong with his thick and rough voice that fell perfectly in the hole which was felt and history was about to be made. The perfect mourning and devotion to Bon was made through the creation of the ultimate heavy rock album “Back in Black”, they were back in lute and with a masterpiece that became immortal with songs such as “Back in Black”, “Shoot to Thrill”, “Hells Bells” and “You Shook Me All Night Long”, a super complete album since the first music till the end with lots of catchy heavy riffs, crazy solos and rock and roll hard lyrics. “Back in Black” was the seventh studio rock work of art and was released on July 25, 1980 and to date has sold over 50 million copies being the biggest selling rock album of all time and the second best-selling history behind only Thriller by Michael Jackson. The album to date has sold over 22 million copies in the United States. This album is the definitive list of 200 albums in the Rock and Roll Hall of Fame. 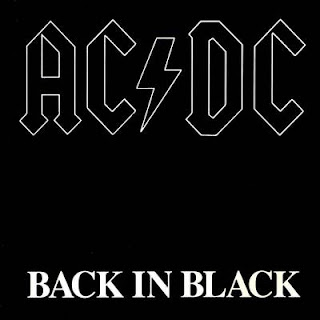