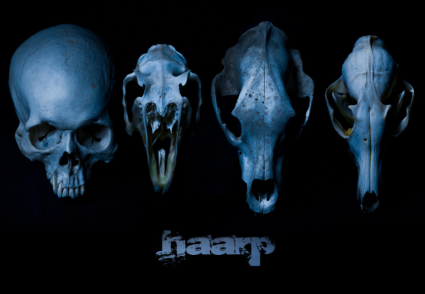 The Apocalypse has come in a quartet human form… they are called Haarp, a New Orleans grindcore/metal band and their new studio offering “Husks”, a 3 track of destructive, brutal, slow-tempo, mega heavy metal brings pure destruction that was unleashed by Housecore Records on September 18.

“Husks” was recorded at the University of New Orleans Performing Arts Center, Fountainbleau Room 7011, and Nodferatu`s Lair by Philip H. Anselmo best known as the lead singer of Pantera and who owns Housecore Records, engineered by Steve Berrigan and Nathan Weidenhaft and mastered at Visceral Sounds by Scott Hull.

Due to unforeseen events which occurred late in the Summer of 2005, members of various disbanded projects came together and formed Haarp and with Shaun dark grunt, Grants chaotic guitar, Keith slow and brutal rhythm and Bret heavy bass let the aggression begins with a project that was born from individualities and now is a bond of styles and creativity full of hatred that brings a Doomsday feeling.

Despite the down-tempo metal style being connected to the doom style, this is not the type of music really incident in this genre. Doom metal is an atmosphere of black melancholic sound and Haarp are much more bonded to a invigorating strong energy known as sludge, a mixture between doom and hardcore punk with a little flavor of grunge, in the final the result is screamed vocals, extremely distorted instruments and contrasting tempos almost in the line of progressive.

The title of the album “Husks” transpires in a perfect way this progressive element, the evocation of modification, the old animal skin left behind and the new transformation. There are only 3 tracks in the album as said before but do not be fooled, the quality surpasses the quantity by far with animal ferocity.  18 minutes of “Deadman/Rabbit”, 9 minutes of “Bear” and 12 minutes of “Fox” in a total of almost 40 minutes of anger, violence, and monster strength music that will make you roar like a beast.

By Pedro Ribeiro: With love for beer... sorry, music from an early age, he studied piano and singing from 7 to 14 years,  then, devoted himself to the study of the guitar for 5 years. visit our reviews page.