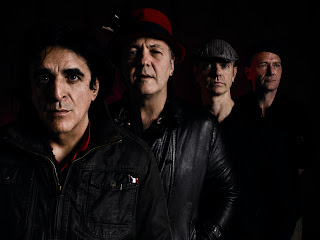 A new time has come, a new age era and Killing Joke wants you to arouse with their new album “MMXII” that is going to be released October 30, on Spinefarm Records.

The name of the album says it all, 2012 is the year we are living, the present, time runs out, the days pass running with thousands of occurrences, information, news,  everything seems smaller in such a big planet, Humans busy walking from one side to another focused on their tasks, their objectives and learn, construct, develop, proliferate more and more. Killing Joke portray with extraordinary dark and deep beauty this organized chaos, this insanity to which we are accustomed and which is normal in our daily life.

Killing Joke is and always was a positive force full of decadent energy, but this new work goes beyond that energy, “MMXII” is alluring, lustful, addictive, a mating ritual between music and life extinction as we know it. Jaz Coleman, Geordie, Youth and Big Paul pulled out a serious heavy and dark sound with their fast rhythm and new age/alternative music which contemplates their roots but they brought us something very new in the line of metal and dance, a very raw sound with lots of melody that transpires our futuristic era.

The album speaks for itself, ten tracks that mirror many thoughts focused on political, anti-capitalist and new-idealistic visions. The age of flux, the end of times in many calendars, like in the Mayas calendar that shows the end of the world this year, and scientific evidence of natural disasters and “polar shift”, the alteration in earth’s magnetic field, will bring this new age- Age of Aquarius. Jaz Coleman says this age is about “acting in a coordinated manner”, “restoring the biosphere”, “well being opposed to economic-growth”, “partnership and co-creation with fellows Human beings”. This is a shout against the current system, against the way we live today, against politics and huge corporations; we really need a change, an age of flux that brings a time where an “elite can be an intellectual powerhouse and not international bankers”.

To hear “MMXII” is to dive in a sea of intellectual thoughts, beliefs, in a cluster of interesting themes that concern us all with extreme well played, complex, astonishing and multi-layered music which elevates the feeling of living in a precarious way but that gives a hope in the change, a positive enlightenment in this age of flux. This is really a masterpiece, 49:23 minutes of a tremendous experience, a work that surpasses any expectation, a new age sound to a new age era.

By Pedro Ribeiro with love for beer... sorry, music from an early age, he studied piano and singing from 7 to 14 years,  then, devoted himself to the study of the guitar for 5 years. visit our reviews page.