Interview with the Guitar Player from "Shining" Peter Huss 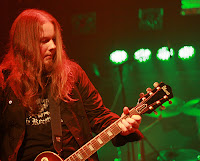 Well, the fans can expect an uncompromising show and probably they will leave totaly drained of energy.
It´s a solid line-up and they can look forward to the best... A good thing is also that we will focus on the west south/west Europe on this tour. We have played so much in countrys like Germany the last few years, and only one time in portugal 2008, that it´s really good with a different route now.

2- Given the growth in all aspects of Watain recently and made thenominations and awards are now a reference in the band BlackMetal, this tour could also serve as a launching pad for theShining?
Yeah! I meen, hopefully we will all benefit from this tour.
But naturaly we will reach out to alot more motherfuckers thanks to watain.
3-The news that have left tell us that the demand for tickets is to be very good in Lisbon they changed the starting location for a bigger /better for logistic reasons. "high demand"?, will it be a good omen for the tour?
Well, I have´nt heard any pre-sales for any of the other shows so I honestly don´t know.
But my guess is that it will be a really good tour when it comes to ticket sales.
4-Some people say the Shining are the Opeth of Black Metal, do you agree? Is this label founded?
I have never really thought about this. If some people think that, well then maybe it is so?
But I think it´s a really flattering comparison, all of us in the band loves opeth.
But we have´nt tryed to be "the black metal opeth" if you now what I meen!? 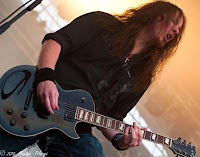 5-Following the previous question, "Shining" presents us with a very well worked black metal, you as a man of large projects (Apostasy, RuinedSoul, Unlocked, Pantheon I), among others, are a guitarist reference, what do you foresee for your future?
Well, first of all I consider myself "a guitarist" and not the typical black metal guy.
Take Apostasy for example, it might be black metal but it sound more like a mixture of dimmu borgir and symphony x.
I like to do as much different projects as I can, big or small, pop or black metal, it really does´nt matter. What can I say, I just love to play guitar.
And talking about Apostasy, you should really check out the new album "nuclear messiah" when it hits the streets in may. Good shit!
6-Changing the subject slightly, Shining still remains in the producer shelf? How is this possible?
If you refer to the new album and all the delays? Well, it´s a long story... let´s just say that it is now finished and after our label have done the promotion a release date will be official.
7-The Indie Records put money into the production of the album, what are they doing to the same in order to be finalized?
Indie has from day one given us alot of support, more then they really should have. And they have also taken full responsibility

for promoting and puting the album out on the streets as soon as it´s possible.
The delay has not been because of them. But a big part of the delay was that we could´nt get enough time in the studio due to other bookings there.
8- It appeared on the net that this tour would be at risk for Shining because of Shining VII not being ready on time, yet you chose to do it professionally, but the losses are many since the output of one album supported with a tour behind definitely brings more advantages at all levels, are they thinking to take any action against the producer?
It´s not really a risk to do the tour, it will be good anyway. But of course it would be better if the album was out allready.
We will play songs from the new album so it will be like a promotion tour instead.
And for your question the answer is no. No actions are needed, we will leave it all beahind us and move on. 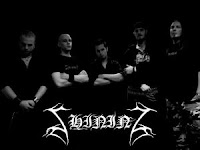 9-The Shining has become one of black metal cult band!
What can fans expect from this new album?
To be honest I don´t have a fucking clue... I think the "usual", some will like it, some will hate it...
But I guess that you want me to describe the music and direction? It´s sort of a mixture of the three latest albums.
The production is more like 'the erie cold' in a way, a little softer then 'klagopsalmer' and more "open" then 'Halmstad' I guess.
When it comes to the songs I can´t really describe it... A couple of the songs are allready on youtube from different live shows, but basicly I think it´s up to the listener to here and judge...
10-Can you comment on the following:
The management and promotion of the band goes by the great lady who is Patricia Thomas, every day I see great praise for her work, I am myself a student and admirer of her work, she is different in some way from all others, she treats each band as they were a child from her own!
Yeah, I totally agree! Patricia has done alot of great work and I really appreciate her dedication to music.
I have of course met her many times and she is just great. She has helped us alot!
11-One last word for fans of the Shining who follow HeavyHardMetalmania!
Thanks Peter and see you at Hard Club Porto
I hope to see alot of you when we bring our show to portugal, and get ready for the real fucking deal!
Thank you!