It was about time to bring a big name here of the English Black Metal , with a musical work for all who appreciate good music, made ​​with passion and dedication  that makes a difference in what it claims to do "Dagon".  Since 1999 with Heathen Deity, through the front man in Hecate Enthroned until he reaches his newest project "FROSTWORK" with a new album  which is to be released shortly. An interview with many news. Without further ado, I leave you below one  Artwork done by the artist Regina Kozlik (Dina DarkArt) in homage to Dagon for his work and encouragement to continue to make us dream. Cheers Brother!


Nuno Ribeiro - Dagon was a Semitic God, an entity mentioned in the Old Testament devoted to farming and agriculture, of particular importance to the people known as Philistines. Of course, Dagon took a far more sinister side according to the mythology of Lovecraft. The entity nefarious figure in two classic stories: Dagon and The Shadow over Innsmouth. He is the Lord of the Deep Ones, a race of creatures half-man, half-fish. Creatures who worship the Great Cthulhu and living in the depths of the seas and have the annoying habit of kidnapping humans and submit females to miscegenation.
How did the name "Dagon" is related to the artist that you embody?
Dagon - I chose the name Dagon when I created HEATHEN DEITY back in the late 90s. I spent al lot of time studying demonology back in those days and read a lot of related text especially "The Goetia ".  To me it’s all about invoking the inner demon with music, especially with live performances. That’s main reason why I decided to be a vocalist - to let out the inner voice.
I like the idea of relating the name to something else entirely, to make it my own, the pseudonym in which my connection with music was known by. Personally I think a Black Metal artist should use a pseudonym as it differentiates personal and public life. 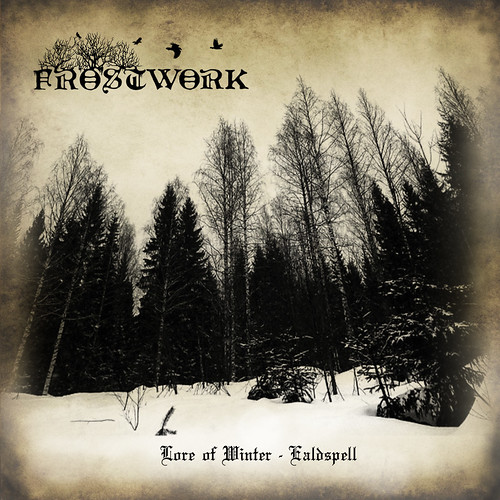 NR - Hope I'm not doing any disloyalty.... The sound that you sent me on to preview "The Essence of Darkest Winter"; you defined it as "One of the faster tracks and one of the more diverse ones on the CD ..."
And my feedback was: Never was the winter so well designed, careful not to burn your hands, this CD is pure ice!
Are you satisfied with the end result?
Dagon - I am. The new harsher sound and the birth of the concept is the true intention of the album .  I can truly say this is my best work to date. In no way have I reached my musical peak yet. I feel I have a lot more to offer and many more ideas that are yet to materialize.
I am never fully satisfied if I’m being truly honest, I am happy with that as I find that makes me work harder. I will always find something that I would have liked to have changed, but I have to draw the line somewhere.
Writing and recording solo with FROSTWORK is all a learning curve for me. This time around, Damien helped me record the vocals so I could concentrate on the actual vocal parts.
The concept which this release will start is only the beginning.
NR -  Without modesty, what feedback you would like to see after the launch?
Dagon - Honest constructive criticism, I really don’t mind at all.
NR - "Dagon as a God" sitting on the throne and with visibility for all, as sees the contemporary world
Dagon - Gods forbid that this Dagon ever becomes a God.
NR - Explain to us in detail in your own words what can we expect this work?
Dagon - Well I don’t wish to divulge too much too soon, as I would rather let the listener come to their own conclusions.
“Lore of Winter- Ealdspell” I feel is more diverse then the previous work, I have been experimenting more on creating sound scapes, building an atmosphere and a story for each song.
Each section has a slightly different feeling, through aggression, desperation and sorrow. I have partly done this with the intensity of the music, using guitars to make a more raw empty feel to the music .
Most of the work has been with the vocals, using varied amounts of reverberation and vocal tone and different vocal techniques, as well as changing how the vocals sit in the mix of each of the songs adding and changing the texture and depth, almost giving the illusion of the voice weaving in and out of the music.
NR - You make music for a "vast minority"?
Dagon - As I have mentioned before I make music for me, to vent and pacify my inner demon so to speak. I much prefer to perform live then record, I’m sure this is the same for a lot of musicians.
I would rather play a live show with ten people in the crowd who have come to see FrostWork  then be carried on the back of a “big” band doing  a show with thousands of people  who just don’t give a damn or even know who’s on stage supporting the main act.
NR - Comments on the sentences below:
Dagon is part of the " Patricia bands official page ", one of the most renowned and respected people in the Black Metal scene.
Dagon - I have known Patricia Thomas for a number of years now, both as manager and more importantly as a friend.  I respect Patricia’s opinion and applaud her continual efforts and contributions to the Extreme metal scene.
Many of the bands under her wing would not be half as successful as they are without her guidance and advice over the years.
NR - "A friend Azrael Hoyland"
Dagon - I have known Azrael since before the creation of HEATHEN DEITY  and he is like a brother to me, we have been though a hell of a lot over the years, both on stage and socially . Without him, in a way only he and myself will know, FROSTWORK may have never happened.
NR - “Hand drawn by Damien”
Dagon - I have known Damien since he joined HEATHEN DEITY. he is one of my closest friends and is a very talented digital artist, musician and sound engineer . My eternal gratitude goes out to him for his continual support and contributions to Frostwork. I would not have been able to produce this release without his help.
Ave Brother !
NR - I can only thank you for your availability, expect the best for the future, you need not knock, these doors are always open for you!
Dagon - Not a problem. Thank you for the opportunity of this interview and I shall call in from time to time !
myspace.FrostworkUK | facebook.Frostwork |  reverbnation.Frostwork Management: facebook.ExtremeManagement