Email ThisBlogThis!Share to TwitterShare to Facebook
Pedro Ribeiro: Death metal is seen as the cult of death, it contains nihilists messages and messages about violence in general. Unfortunately many are those who spit in death metal without ever realizing the beauty of human fragility. What excites you in this music style?
Tucker: What excites me about death metal is that it has variety. There are a lot of different styles within death metal. For me it is a way to express many things,  both musically and verbally. I am glad that death metal isn't for everyone! I understand that not everyone can even comprehend the subject matter, let alone embrace it.. Slaves!
PR: How did the name "Warfather" emerged? 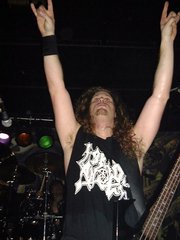 Tucker: It sort of became a nickname, and then with the encouragement of friends I decided it was a logical name for this band. The name is fitting for this band and our attitudes.

PR: "Warfather" is the union of experienced musicians of death metal, are we going to listen an amalgamation of different styles and forms of play or a unique style in which you are the conductor leading the symphony?
Tucker: I have been playing death metal for years and never had my own band to express music the way it is in my head. Well now I do have that band.
I feel the music is very orchestrated  and I am the ring leader so to speak.
However I did refrain from using orchestrations beyond , guitar , bass , drums and vocals.. I wanted to do a very pure death metal symphony.

PR: Now that you are like a fish in water in this new work which you assert to be your kind of death metal, do you feel the fear of dropping your origins and address a new path assuming the role of guitarist?
Tucker: I feel no fear, only excitement! I have always played guitar. It comes natural, it is were my real origins are. I played bass due to necessity.

PR: You already have experience in the field of production, do you think that being able to produce your own work in which you are 100% concentrated is a best value?
Tucker: Absolutely, i trust no one as much as I trust myself.

PR: Can you talk a little about the message that "Warfather" intends to pass to their listeners?
Tucker: I think that there is another crazy shit going on in the world , that the Warfather message will ring clear. I believe it is time for a change and I have my ideas of where the world is heading, but before any change , there is an ending. This album is about that ending.

PR: Do you already have the tracklist, cover art and its name?
Tucker: Yes, we have everything ready now, and will be making announcements very soon ! 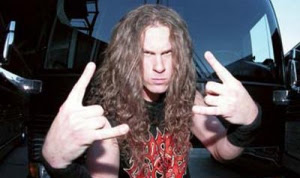