Belgium’s renowned sludge ministers AMENRA are preparing for the worldwide disbursement of their newest studio full-length Mass V this Autumn, their first for Neurot Recordings.

Since their 1999 inception, AMENRA have infiltrated underground music communities with their grand style of organic sludge/doom metal through a plethora of LPs, EPs, and splits with Hessian, TBHR, Oathbreaker and others, through a variety of independent labels including Anvil Of Fury, Sound Devastation, Hypertension and their own Church of Ra imprint. Intense touring and festival appearances across Europe and beyond helped these diverse recordings transform into the live setting, captivating visual effects always an imperative element of the band’s on-stage dominance.

Neurot announced AMENRA’s induction into their clan in July of 2011, which was followed directly by the band’s second European tour in support of the mighty Neurosis, the bond between both parties strengthening. Last November the members of AMENRA wandered through the countries neighboring Belgium in search of the perfect inspiration for their next studio opus. The journey led them to the village of Wissant in North France, where upon discovering vast lands still decimated by and littered with carnage from World War II battles invoked the proper stimulation the band needed to create Mass V.

In May the band entered the expansive La Chapelle Studio to create Mass V, assisted by engineer Billy Anderson (Eyehategod, Neurosis, Melvins, Sleep, Swans, etc.) to bring their sonic attack to its most crushing. With possibly their most inspired material to date in hand, brandishing forty minutes of material through four movements, they utilized the photography of Stefaan Temmerman and the talents of Webecameaware for the layout, AMENRA completed their vision and are preparing for the world to hear this sonic tour de force.

Mass V will be released in Europe on November 26th and in North America on November 27th, amidst an ongoing string of tour and festival performances continually being booked across Europe for the coming months, including Amplifest, Damnation and Le Guess Who festivals before the year’s end, and already confirming sets at Roadburn and Asymmetry next year. AMENRA have also announced that the record release show for Mass V on December 22nd – an anticipated event which sold out in record time as soon as it was announced – will now be broadcast live online for their fans across the globe not able to attend the event. More details of this can be found HERE. The band have just confirmed a show on February 10th at De Kreun in Kortrijk, Belgium, so fans who missed out on tickets for the release show will be given another chance to see them. Show info is available HERE.

AMENRA have also just posted three short tour documentaries, filmed and artistically presented by Jeroen Mylle, captured on the road with the band over recent months. View all three mini-films and much more on the band’s new album AT THIS LOCATION. 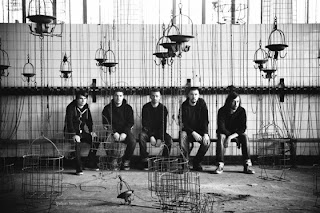 AMENRA will be re-releasing their Mass III DVD this month through their online store; preorder your copy NOW.