Email ThisBlogThis!Share to TwitterShare to Facebook
Fourth Full-Length Out This Week Through Candlelight Records

As American doom metal unit DAYLIGHT DIES release their forth studio full-length, A Frail Becoming, via Candlelight Records this week, the band’s brand new video for the album is today unveiled via Metal Injection.

Constructed for the album’s epic fourth track, "Dreaming of Breathing," the video was directed by Ramon Boutviseth, who DAYLIGHT DIES have previously worked with. Stated drummer Jesse Haff on the course taken in bringing the video to fruition: “We worked with director Ramon Boutviseth back in 2006 when he filmed the ‘Lies the Bind’ video. We were blown away by what he delivered, and by his talents and ambition. We knew without hesitation he was who we wanted to work with for the ‘Dreaming of Breathing’ video. It was important the video not only visually matched the aesthetic of the album art, but also communicate at least metaphorically some of the meaning behind the song. He filmed the narrative bits in Malibu, California, and the band shots in a small studio with no air conditioning during a sweltering hot evening in North Carolina. We think the end result is gorgeous and fitting, and are just so pleased to have worked with Ramon and his team once again.”

Delve into the visual version of the beautiful, pummeling "Dreaming of Breathing" at Metal Injection RIGHT HERE.

Fans can also listen to “A Final Vestige” from the album at the Candlelight Records Soundcloud page AT THIS LOCATION, as well as the opening track “Infidel” at Decibel Magazine RIGHT HERE.

One of the premiere acts of the genre to hail from the continent, DAYLIGHT DIES have amassed a dedicated following through their live performances and multitude of releases and LPs since the mid-‘90s. On October 9th the band will release their fourth album, A Frail Becoming, onto the North American masses. Yielding nearly fifty minutes of the band’s tumultuous, orchestrated doom metal superiority, as always flooded with as much emotion as aggression, A Frail Becoming is the band’s most accomplished work to date. The album was mixed by Jens Bogren at Fascination Street Studios (Opeth, Katatonia, Devin Townsend), the packaging bearing photography from award-winning Jonathan Mehring in a layout designed by Agni Kaster.

Stay tuned for pending tour actions and more over the coming months as DAYLIGHT DIES head out in support of A Frail Becoming once again in early 2013. 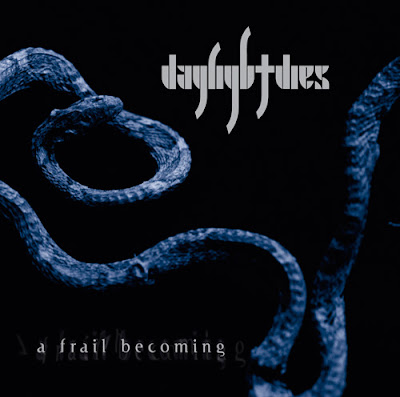