DE MAGIA VETERUM To Release The Deification Through Transcendental Creations

Email ThisBlogThis!Share to TwitterShare to Facebook
Amateurs from all spectrums of extreme music will be left in panic after having witnessed the latest crafting of maniacal genius from DE MAGIA VETERUM. With fourth full-length, The Deification, DE MAGIA VETERUM again unravels a harrowing mesh of monumental disharmony. Rarely do musicians manage to combine such extreme polarities in music. Just when you think you’ve nailed a certain song structure, the next riff will drag you through unmitigated antimelodic musical chaos.

Spawned in 2003, DE MAGIA VETERUM is the magickal creation of one Mories (Gnaw Their Tongues, Ophiuchus, Pompidou, Aderlating, Astral, et al). Bearing only a small resemblance to his many other musical endeavors, DE MAGIA VETERUM represents a far more chaotic outlet for the multi instrumentalist; one that prefers to communicate the grand mysteries of life and death through a supreme violent and mesmerizing medium. In May 2009, Transcendental Creations released DE MAGIA VETERUM’s Migdal Bavel debut which offered up 37 minutes of raw, anarchic, esoteric black metal. Its follow-up, The Divine Antithesis, once again guided listeners through Samael’s seas of madness. Noted Don’t Count On It Reviews: “A lot of what's on here is quite disorienting and to an extent progressive at the same time. Everything is always changing, blazing black metal riffs will slow into funeral doom and then burst into an almost grindcore-like part within several seconds of each other.” Added Heavymetaltribune.com: “It would not be surprising for one to think that his record player has jammed as soon as the songs come on the speakers and it certainly takes time and repeated listens to get used to something as abrasive and seemingly mindless as this.”

The Deification is the logical next step in Mories’ nightmarish journey through the pulpits of psychosis. Featuring seven tracks of chaos, disease and sonic corruption, The Deification is a mentally and physically demanding behemoth of audio dread and arguably Mories’ most potent offering yet.

The Deification will be released through Transcendental Creations on October 22, 2012. For pre-order info, point your browser HERE. 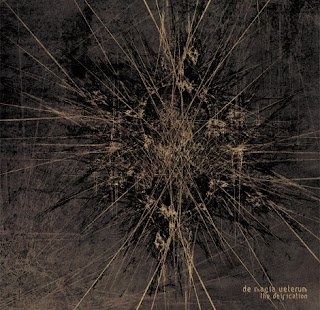