Considered to be the great hope of the German hard rock scene, KISSIN’ DYNAMITE have dominated stages across Europe since the release of their debut album Steel Of Swabia in 2008, when the singer was just 16 years old!  After winning over crowd after crowd with their energetic live show and infectious anthems, the band's sophomore albumAddicted To Metal was released by Germany's massive AFM Records in 2010, which even featured the legendary Udo Dirkschneider (Accept, U.D.O.) on the title track.

Their success and experiences over the past few years have shaped the band and increased their professionalism in every department, which is apparent on their  third full-length, Money, Sex & Power. Here KISSIN’ DYNAMITE release ten blazing numbers which still follow the classic metal path of previous releases, yet more than before they display their very own brand of sleazy heavy rock, inspired greatly from timeless masters of the art including Mötley Crue, Whitesnake, AC/DC and Guns 'N Roses. Money, Sex & Power showcases the band taking their authentic, raw, melodic and powerful songs to new levels, and sees them more determined to dominate the rock scene than ever before.

The band is on tour with DRAGONFORCE and Huntress right now, see http://www.kissin-dynamite.de/en/dates for dates! 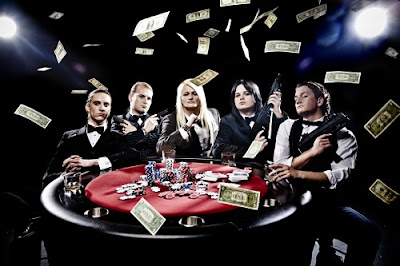