Email ThisBlogThis!Share to TwitterShare to Facebook
English, Death/Doom Metal band "My Dying Bride" has posted online a new song for "Hail Odysseus." The track appears at forthcoming album entitled "A Map of All Our Failures" which will be released Oct 15, 2012 through Peaceville. "Hail Odysseus" can be heard below.

My Dying Bride has been the leading force in the death/ doom metal genre since their inception in the early 1990’s and have gone on to forge a legacy of greatness in the field over the past 2 decades, since 1992’s debut release, As The Flower Withers.

2009’s For Lies I Sire set and subsequently met new heights of expectation placed upon the legendary Yorkshire doom troupe, but A Map of All Our Failures is a considerable step up for the band and further voyage into the darkest depths of humanity, religion, folklore, love and death.

My Dying Bride’s distinctively sumptuous dual guitar melodies effortlessly flood into juggernaut doom metal riffs, with the vocals of Aaron Stainthorpe weaving a rich tapestry of tragic tales into the accompanying soundscapes. A Map of All Our Failures is perhaps best and most effectively summarised by guitarist Andrew Craighan, who describes the album as “a controlled demolition of all your hopes”.

The album recording and mix was completed at Futureworks Studios in Manchester UK, with long-standing production maestro Mags at the helm. Artwork appears courtesy of Rhett Podersoo at Machine Room. 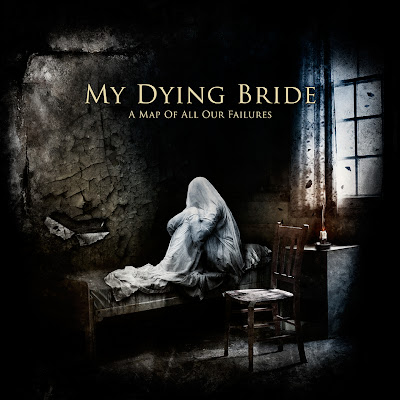 For more info, go to: www.peaceville.com/mydyingbride