Email ThisBlogThis!Share to TwitterShare to Facebook
Chilean Thrash metal band NIMROD recently released on its youtube channel the second official music video supporting its latest album "Return to Babylon" released via Digmetalworld Records. "Return to Babylon" was recorded at Sade Studios by Juan Pablo Donoso in Santiago, Chile. The album features Erico Morales (DANTESCO, Puerto Rico) on vocals. The music video of the track "Night of the Witches" was Directed by Christian Irarrazabal and Rodrigo Cerda. Check out below.
Guitarist Cris Ira has commented:
"We had a long hiatus from 1985 to 2007, now things are quite different, everyone is giving 100% to the band.. we are already recording the second album that will be released in 2013. We came back to stay..." 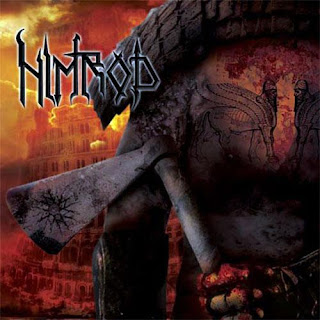 
1. Night Of The Witches
2. I Am
3. Return To Babylon
4. Broken Wings
5. Ready To Burn
6. Death Behind
7. Betrayed Of The Soul
8. Time Of Changes
9. Dark Land
10. Fall Of The Tower
11. Nimrod
Nimrod is:Leonardo Caballero - VocalsChristian Irarrazabal - GuitarsGabriel Head - GuitarsFernando Gonzalez - BassRodrigo Cerda - DrumsFor more information visit its official Facebook page. You can stream the whole album on the following location.