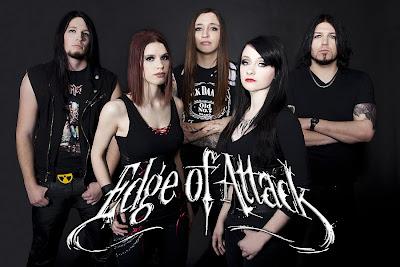 Open wide your ears for one of the most voracious releases of thrash/power metal of 2013. If what you are searching for is something new with a thunderous old school sound blended with a melodic and modern raging metal then you don´t need to bother looking further. Once again the gods of metal descended from the sky and sent five warriors from the cold Northern lands of Alberta called Edge of Attack in a difficult and promising quest with the noble task to unleash metal in Humanity, just to commend your willingness to listen excellent extreme music. We must take a bow towards their gifts!

Edge of Attack instantly blew my mind when I heard them for the first time and to tell the truth I thought they were older. It's easy to allow ourselves to be deceived when we are facing a strong and professional band like this which seems to have quite a few years of experience… no! They are a new amazing formation that took us all by surprise with the release of only two singles that quickly gave the band the notoriety they need and a legion of dedicated fans that continues to grow.

These musicians and warriors impressed me like few managed to; 2012 proved to be a year of intense battles and they worked very hard in the conception of their self-titled (“Edge of Attack”) and first full length that is going to be released on February 19, 2013 via  Spread The Metal Records. These past months they´ve been on tour with the new material, they were signed, they´ve been writing and recording new material and they took Denver as a new warrior to replace Kayle on bass.

“Edge of Attack” is a really special work and the reason why it´s self-titled is because it represents a new open door to the band, a reinvention of sound,  a search within of what they intend to represent as a musical force. In terms of sonority the album is huge giving us a well balanced heavy metal with a thrash fusion that is very melodic and a symphonic touch proper of power metal that crushes everything on site. Edge of Attack combines the beautiful and strong female voice of Roxanne Gordey, the furious guitar of Jurekk Whipple, the intricate bass of Denver Whipple, the complex riffing rhythm of Dallas Dyck, the extreme drumming of Trevor Swain with choral and symphonic arrangements to create a musical vice, one of the few vices that are good for your health. Also the album has the presence of some guests; you can hear the immense voice of Ivan Giannini in the song “Demon (Of the Northern Seas)”, the deep growling of Ryan Bovaird in the music “The Damned” and the great voice of Pellek in the eigth minutes super track “Set the World Aflame”.

Jurekk Whipple the man behind the lead strings, vocals and behind the production of “Edge of Attack” is a natural prodigy and a master of metal; he has smooth and fast fingers that run through the guitar like a body of a woman, bursting the instrument in flames. He runs the show with crazy and fast shredding, melodic and catchy solos, hard riffs that progress fluidly and hit you like a freaking stone. In addition to all the heaviness the music also offers some clean, melodic and exotic lines in songs such as “The Hauting”, “In the Night”, “Rise Above” and “Set the World Aflame”. Besides being a great musician he proved to be a great producer not allowing loose ends in the work and keeping it less professional but with enormous quality.

I highly recommend you to buy this album if you are a power/thrash lover or if you want a more modern metal sound filled with haunting melodies, fast shreds and catchy riffs. “Edge of Attack” is in my list for 2013 best modern… Thank you gods of metal for giving us one more reason to headbang to loud music!

One melee with the words, ideas and its paradoxes... albuns that are news, the reviews at "HeavyHardMetalmania.net", always with its watermark,  Pedro Ribeiro, with love for beer... sorry, music from an early age, he studied piano and singing from 7 to 14 years,  then, devoted himself to the study of the guitar for 5 years. "The wisdom is found in the extremes, all extreme Metal here!"


Vocalist Roxanne Gordey comments:
"We have been looking forward to this for so long! For us, this album represents our dedication to our fans. They have shown the utmost loyalty and patience, so we hope that our efforts have an opportunity to shine with this release. Our journey through these songs has spurred a creative evolution of Edge of Attack, and with that we hope our self-titled LP will mark our place in the metal community." 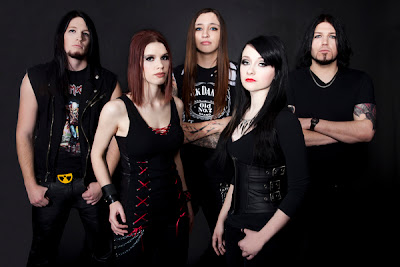 EDGE Of Attack will be released on Tuesday, February 19, 2013 via Halifax based label Spread The Metal Records, which is now available for pre-order here.

For more info on Edge of Attack please follow the band at these links: